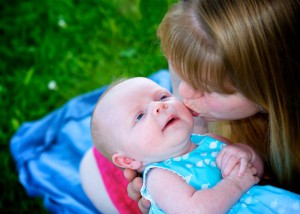 So we’ve been a bit busy over the past several months…years…since we last updated our page.

To start with, Kim (me!) got her Master’s degree from St. Joseph’s College of Maine in 2011.  She finished her coursework in August but due to college bureaucracy, her graduation date was officially December 2011.  She had the option to march in the St. Joe’s graduation in May, 2012, but she was very, very pregnant at the time.

Pregnant, you say? Yup!  Kim and Phil welcomed baby Zoey Elizabeth to the world on May 21, 2012 at about 9:20 PM.  She’s wonderful, smart, and beautiful.  She’s growing like a weed!  She’s adorable.  We never knew we could love someone so much so fast!!

Our lives have been kind of topsy turvy since finding out we were pregnant,and then with the arrival of Zoey.  See, our house only had 2 bedrooms, and Phil ran his business out of the second bedroom.  So we embarked on a construction journey that’s still not finished.  We tore down our old, leaning, 1-car garage and built a 2.5 car garage with an office and laundry/mud room/pantry.  But…it’s still not really done. Our contractor has been slower than slow, and on occasion has disappeared for weeks to a time.  So the garage, which should have been done before Zoey was born (our contract said it would be done May 4), still isn’t completed. It’s close, but there are still some major things to finish before winter.  We’re frustrated, to say the least.

We’re taking this year off from our giant Christmas light display to enjoy the holidays as a family.  The lights take a lot of time and money, and this year we’re short on both.  Having a baby and a new home addition stretches the budget, and neither of us felt like spending 40+ hours putting up lights outside with a 6 month old baby.

We’re so grateful to our family and friends for all their support during this adventure.